Well you should be used to the format of the temple of din by now so without further ado here's the menu:

Who are The Def-A-Kators ? - A brief history

Welcome to the true beating heart of the temple of din the legendary, nay mythical, home of the millenial hyperbeat combo feared and respected throughout Blackpool punkdom as the mighty Def-A-Kators.

It all started many years ago when, armed only with a trusty fostex X-15 four track recorder, a clutch of home made guitars, a mighty host of fuzz boxes, assorted pathetic sounding plastic instruments gathered from among the plastic tat merchants of Blackpools golden mile, weapons grade kazoos and a maniacal lust for grins there came to meet four lads brave and true who decided that the universal hearbeat was becoming ready to groove to their unique idiopathetic sound barrage.

After much gnashing of teeth and trialing of skills a line up was decided. From the initial combatants who entered the fray there were but four survivors. Sergeant Panic weilding assault guitar, Lew Siffer providing stun guitar, Count Basic carrying sonic rumble hammer with this mighty wall of sound being welded into place around the impersonal rythmic guidance of Dr. Rythmn. Naturally they all sang their hearts out (especially the good lady Doktor)

And so it came to pass the mighty Def-A-Kators were born. The band were not shy nor did they believe in overcomplicating things by endless rehersals. Within two short sessions at Section 25s Singleton street studios they were ready for their first gig. It was not to be a pretty sight. Undaunted as they were by the lack of anything resembling a catchy tune the fearsome foursome decided to plunge headlong into the abyss and accepted a support slot at Prestons world famous warehouse club with the, then up and coming, Macc Lads.

The evening got off to a remarkably bad start when having forgotten totally about the gig Count Basic fell into bad company in a local alehouse and eventually had to be carried on stage. Despite their entusiasm the crowd merely bayed for blood and it was all our heroes could do to escape a painful death at the hands of the beer frenzied mob. Ah but they had taken their first heady draughts of stardom and undaunted by threats of immediate disembowelment the band decided to further their holy cause by moving into the heady realms of four track recording.

It was at this time that the services of lone guitar man Duke Box were acquired and before long the now fivestrong Def-A-Kators could be found crammed into the Temple of Din (Mk I) which in those days was a combination of Duke Boxs mums back room and kitchen. Progress was swift and before a week was out the first batch of classic had been carved out. Featured tracks included War's A Bore, (now I wanna be) Your Hamster, (every Friday evening I go out) Watching Dogs, and the now timeless classics (we're all wearing) Red Underpants and I'm only Happy When I'm Killing My Gran'ma.

The gods looked down and saw it was good. All was well in the land of the Def-A-Kators.

After further sporadic live outings, including an infamous appearance at Blackpools Adam and Eve club in one of those dreadful Rock Battle competitions, it was decided that the original sessions were not enough. Despite the absence of Lew Siffer, who had moved on to pastures new, the remaining Def-A-Kators now roved between what is now the current Temple of Din (Duke Boxs back room and kitchen) and Sergeant Panics flat thereby to record the second installment in their ongoing saga. From these sessions came such classics as the semi legendary Theme for the Def-A-Kators, Aquaplane, Satan's in my Telly, Headache (A Dull Day), Punkytown and the follow up to I'm only happy... - Granma's Revenge !

There then came a period of great inactivity (much to the relief of our assorted neighbours) but several years later a collective dissatisfaction with the state of musical affairs caused our heroes to once more take up the fight against normal musical practice. After a few rehersals a fresh set of songs was written and another recording session was planned but this time there would be a difference....

After raiding their collective piggy banks it was decided that rather than record in the trusty temple of din the services of a local studio would be employed. There was much uncabling of equipment, loading of vans and purchasing of booze and chocolate milk shakes but after a hard days recording the "6-track attack" was complete. New songs featured were Gulag, P dot 118 (Rosita), Shaft 27, Window, Scurvy, and Object

Once more the gods looked down and saw it was good. Again all was well in the land of the Def-A-Kators.

But dear reader the story does not end here, further rehersals have been undertaken and a fourth session is imminent. This time there will be a bumper harvest and courtesy of an all new improved temple of din setup the new tracks near completion. Keep a space in your hearts ready for Blitzer, Cumulo Nimbus, Impaler, Ravern, Spahn Ranchhand, 'Ish, Ponk ist Dood, Deliverance and the Bedtime Story for Mechanical Owls.

BEWARE... Once this new batch of songs have hatched it is intended to translate them to audio CD format.

Those currently responsible for Def-A-Kation

Texas Redneck With A Big Cock

After over a decade gathering virtual dust in the computer systems of the Temple of Dins and Batcow Manors, the greatest album in the history of mankind has finally been released as the Defakators finally make their appearance on CD !

And what a release it is as the mighty Defakators unleash their awesome 27 track epic "Texas Redneck With A Big Cock" on an unsuspecting (and probably uncaring) world.

Not for these chaps the twee, namby pamby, sickly slick elevator music churned out by bed wetting dogooders such as Travisty, Coldfeet and USuck. This is manly music made by deranged ubermen. Forged in the outer recesses of the human imagination it's a virile testament to pure unbridled creativity. You will not hear it's like again so miss out at your peril ! 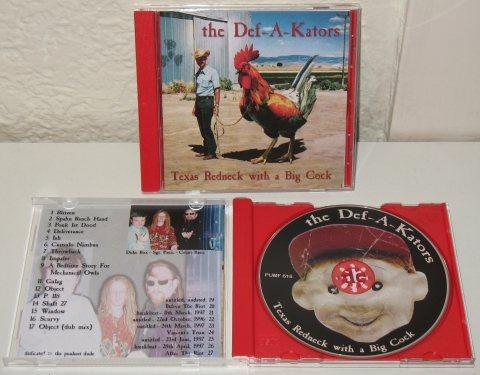 To order a copy simply head on over to the PUMF Website where you can purchase one for a mere £ 5 or, if you happen to be in the right pub at the right time, then a small promotional batch of copies can be had from Herr Ramjet for a negotiable fee (either £ 3 or a pint whichever you prefer) Buy one today and become the envy of your family, friends, slaves and house pets !

As you can see we're not the most prolific of live performers but when we do play live then, boy oh boy, do we put on a show (usually of how to cope with utter chaos i.e. instruments breaking down, drum machines that won't sync - even to themselves, how not to impress sound engineers and other assorted troubles) But at least we do occasionaly try !

War's a bore / I'm only happy when I'm killing my Gran'ma

War's a bore / I'm only happy when I'm killing my Gran'ma